The twelve battles which Arthur is said to have fought all fit with specific Scottish sites particularly those mentioned in contemporary annals and the battle of Badon which has caused so much difficulty for those seeking to show Arthur as having lived in the West of England. Camlaan is quite probably Camelon near Falkirk on the Forth. 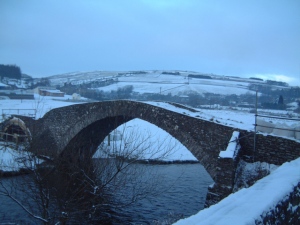 Bridge over Gala Water at Stow of Wedale

** another possibility is the Douglas Water which runs from Glenbuck, near Muirkirk in Ayrshire, past the slopes of the ancient fire-site, Tinto Hill and joins the River Clyde not far from Lanark

One thought on “Arthur’s 12 Battles in Scotland”

Error: Twitter did not respond. Please wait a few minutes and refresh this page.